Lately there has been a lot on the interwebs about "Data-Oriented Design." Mike Acton tackles the problems with textbook OOP with the provocative title Typical C++ Bullshit, Sony has an excellent presentation titled Pitfalls of Object Oriented Programming, and Games from Within discusses the subject here.  For any programmer wishing to write code that performs well on today's processors, I highly recommend reading all three. 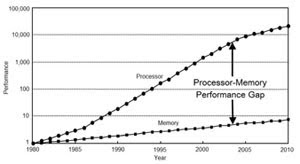 The fundamental problem is pretty simple: C++ was designed during the early 80's, when the gap between processor performance and memory performance was small. Now that gap is large. Notice that the vertical scale on that graph is logarithmic -- the gap is nearly one thousand times larger than it was in the early 80's.

It is understandable that textbook OOP, which came to be under such different hardware performance characteristics, would have performance problems with today's hardware.

I've been thinking about this problem lately and my conclusion is we need better language and compiler support for the layout and access of data in systems languages. Whether that comes as modifications to C++ or as something new, I'm not going to wade into that swamp today.


C itself is really just portable assembly language. It defines an abstract machine model but there is a pretty close mapping between C code and the assembly it generates. C++ kept this ability (as it is mostly a superset of C), but added in abstractions to help deal with large code bases. These abstractions necessarily came at a cost -- you can write C++ code that does not map very closely to the assembly it generates.

My proposition is that the data organization capabilities of both C and C++ are the equivalent of portable assembly language for data: a close mapping between the code and the data layout it generates. While the C++ standard does not actually specify a memory layout, the truth is the de facto standard in most compilers is the layout of structures or classes, minus some inserted vtable pointers, generally correspond 1-1 to how they are laid out in memory. Most operating system APIs depend on this fact, as you pass structures to them with strict memory layouts.

To see why this is a problem, let me make an analogy with instruction scheduling. As processors became pipelined and then superscalar, the scheduling of instructions to keep all those pipelines full became a big problem. The early C and C++ compilers did a very poor job of it, and people resorted to either reorganizing their code or dropping down to assembly language to take proper advantage. Compilers have gotten a lot better at scheduling instructions over time -- to the point that things like inline assembly hurt the ability of the compiler to reorder instructions. With the advent of compiler intrinsics, which the compiler understands and can schedule along with other instructions, you're better off sticking in C or C++ rather than using inline assembly these days. While even in C (which again, is portable assembly language), you still run into code that the compiler does not generate machine instructions as you'd like, the tools to detect such problems are quite good and the mechanisms to fix them are usually localized to a particular function.

Moving over to the data side, we are constantly stuck in a space equivalent to hand-scheduling instructions. I think this is the challenge of data-oriented techniques, is that you are forced to be in a head space where you are spending a fair amount of time doing analysis of data access and rearranging code and data structures rather than solving the actual problem your code is intended to solve. I'm sure there are people for which this comes quite naturally (I suspect Mike Acton is one), but for me, at least, this takes a considerable amount of mental effort.

Where we need to be


As I've thought about this more, I've realized that both C and C++ fail in offering any sort of tools to help the programmer tackle the problems of data organization. If the compiler is free to reschedule instructions, should we not let it be free to reorganize our data structures?

Obviously, the compiler can not do this alone. One recurring theme in these presentations is that textbook OOP tends to focus on singular entities. A class has a virtual function that deals with late dispatch on one object. A class defines the layout for one object. Obviously, you don't have to design your classes this way -- and in fact, the above presentations argue you shouldn't. But if you find yourself fighting with or avoiding the language abstractions rather than using them, what have you gained? In that sense, C++'s abstractions hurt us because they lull us into writing code that will run horribly. We need better abstractions.

Both of these presentations move away from the model of classes that deal with one thing and move to code that deals with sets of things. If you are going to do a sphere in frustum test, you're going to be doing it on many things, not just one. Even when sets are not homogeneous, we deal with that by sorting them by type, and executing our operations in bulk on each type.

We need more than sets, though, because different operations need different views on the data. Transform update may only be concerned with the matrix of a game entity, whereas higher level AI code may have a completely different view. We want our data to be laid out optimally for some of our operations, which may mean different data is stored in different places, or we may even have multiple copies of some data in order to support different operations.

One of those views is the view we use for debugging. In our head space, we tend to think about single entities in the game world -- this projectile, this character, this mesh. Textbook OOP tends to couple class layout with this debugging head-space, and is part of the attraction -- I don't have to care about what is going on with everything else in the program, I have everything I need to know about this mesh right here.

The organization the computer needs is much different, though -- when doing frustum culling, for example, what we really want is just a big array of AABBs. When debugging why a specific mesh is being culled, though, it really helps to see all the data about that entity in one place. Otherwise, you spend a lot of time traversing data structures in the watch window, just to find out what state an object got in that caused it to flip its visible bit to false. So the view of the data that humans need is another important piece of the puzzle.

This is the limit of my current musings. I want to write code that deals with sets of things as a natural part of the language and not just some templated container library. I want to be able to specify multiple views on my data, and have the compiler use this information to generate optimal data layout for certain operations. In the debugger, I want a debugging view which is similar to the textbook OOP view. I want a language that is designed to provide these things, and will tackle data layout as an optimization problem similar to register allocation, instruction scheduling, or inlining.

Perhaps this is too radical a departure for a low-level language such as C or C++.  I would hope there are some research languages out there that do the kind of things I am talking about -- other duties have prevented me from doing anything more than a cursory literature search. Given that the processor-memory gap is only likely to get worse, I'd certainly hope there is.
Posted by Steve at 12:25 PM 12 comments: