A while ago Jon Greenberg brought up the idea of accumulating lighting in screen space using spherical harmonics, in a blog entry entitled "Has anyone tried this before?"

I've been doing deferred lighting experiments in XNA, and decided to give this technique a try. Please note I'm not doing any antialiasing and all screenshots are the definition of "programmer art" cobbled together from various freely available assets.

Screenshots show full resolution deferred lighting on top and the screen space SH technique at the bottom in the Sponza Atrium by Marko Dabrovic: 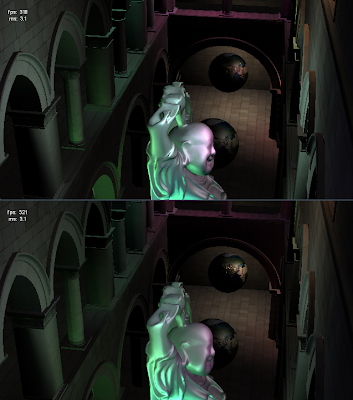 The technique was pretty simple to get up and going, and produces some interesting results. The above images are with 27 point lights, 3 spot lights, and 1 directional. The directional is the only light evaluated at full resolution per-pixel, in the apply lighting stage.

The basic idea is to use a quarter-sized lighting buffer (thus, in this case, 640x360) to accumulate 4-coefficient spherical harmonics. The nice thing is you only need the depth information to do so. I used 3 FP16 buffers to accumulate the SH constants. Points and spots are evaluated by rendering the light geometry into the scene and evaluating the SH coefficients for the light direction via cube map lookup, and then attenuating as normal. For the directional light, I evaluate that in the apply lighting shader. I'm not rendering any shadows.

For diffuse lighting, it works pretty well, although due to the low number of SH coefficients, you will get some lighting wrapping around onto backfaces, which in practice just tends to give you "softer" lighting. That may or may not be desirable.

Even though the lighting buffer is quarter-sized, you don't really lose any normal detail since SH accumulates the lighting from all directions. In my test scene, the earth models are the only ones with normal maps (deferred on the left, SH on the right)

I found that when you upsample the lighting buffer during the apply lighting stage naively, you would get halos around the edges of objects. I fixed this using a bilateral filter aware of depth discontinuities.

I was able to fake specular by extracting a dominant light direction from the SH, dotting that with the half vector, raising to the specular power, and multiplying that times the diffuse lighting result. It doesn't really give you great results, but it looks specular-ish. I tried using the lighting looked up at the reflected view vector but found that gave worse results.

Performance-wise, in my little XNA program, which I'd hardly call optimized, the SH lighting is about the same as deferred lighting when I store specular luminance instead of a specular lighting color in the lighting buffer. Here's some screen shots showing 388 lights (384 points, 3 spots, and 1 directional): 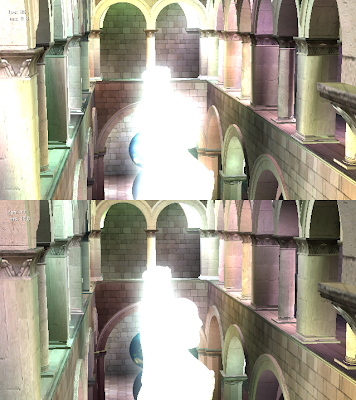 Note that there is at least one major optimization that could be performed when I'm calculating the SH coefficients for a light. Currently, my SH lookup cube map is in world space, but my light vectors are calculated in view space for points and spots. This causes me to make a matrix multiplication against the inverse view matrix in all the lighting shaders. This could probably be sped up quite a bit by calculating the SH lookup cubemap in view space each frame.

All in all, it is an interesting technique. I'm not very happy with the specular results at all, and the softness of the lighting could be a benefit or a drawback depending on the look you are going for. Jon also points out that the lighting calculations could easily be moved to the CPU on some platforms, since they only depend on depth information. I'm probably not going to explore the technique much further but thought I'd post what I'd found from the limited investigation I did.